“He is a great guy. He is very nice. He is exceedingly talented… gifted in fact… possibly the best impressionist in Las Vegas.  Jones has a masterful ability to manipulate his body, his face, and his voice. His routine gives us a fast paced and delightful romp through musical history, and we relive the times by hearing our favorite artists. He makes the time fly by with his whirlwind of impressions. Larry has earned the highest of accolades from the press and the public.”   Chuck Rounds -Igoshows.com

The fast-moving show features about 70 impressions – everyone from Sammy Davis Jr., to Johnny Cash, to George W. Bush,to Bill Cosby to Cher get the Jones treatment. It never seems to matter whether the subject of his impersonation is male or female, high or low voice, all over the tabloids or a one-hit wonder from the ’70s. Jones channels all his subjects with sensitivity and a sense of humor. Larry has an impressive vocal range and when he breaks into “I Can’t Get Next to You,” singing all four of the Temptations’ vocal parts, it’s not only hilarious, it’s astounding.”   Jack Houston – Las Vegas Magazine

“I’ve seen over 85 shows in Las Vegas and Larry G Jones’ show is among the ‘best of the best.’ -Tom Wilkinson -Vegas4Locals.com 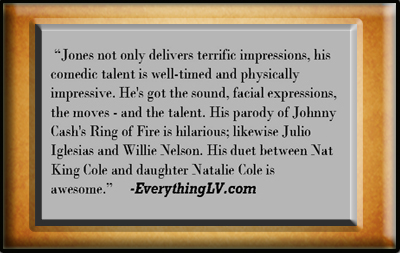 “He was buzzing through impressions so full of one-liners and comedic lyrics that you barely stopped laughing at the last one before he hit you with another zinger. Heir to Danny Gans.”-Ted Newkirk- Accessvegas.com -2001

“His mannerisms & voices are dead-on, it is his comical parodies that set him apart. Unlike most impressionists Jones can readily switch his voice from men to women and back again” – Las Vegas Senior Press

“It’s the delivery and comedic lyrics of the songs that make this show a winner. I’ve gotta tell ya, this guy can sing. Larry combines his great voice with a personality that marks this show’s appeal. He could make it just as well as a singer who does impressions rather than an impressionist who sings” -LasVegas.com 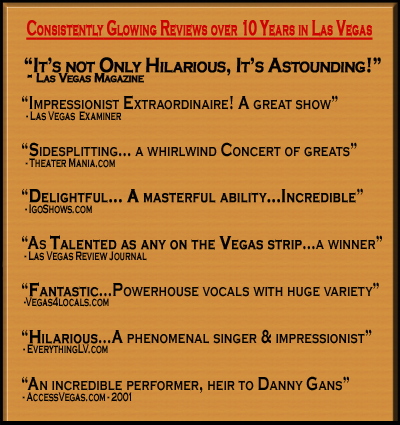 “One of the Best Impressionists in the world” is a singing impressionist  Voice Impersonations. Funny clean comedian for corporate entertainment.