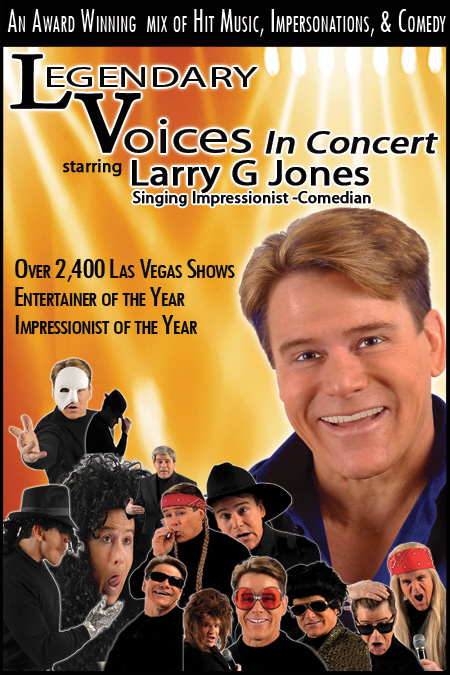 The right corporate event entertainment could transform your next event from a ‘meeting’ into a ‘masterpiece!’ Create lasting memories with Larry G Jones’ multi-award winning musical comedy show.

With a show customized for your audience, Larry will work directly with you to create the perfect blend of hit music, impersonations, and clean comedy for your corporate event entertainment.

While you ‘could’ put your neck on the line and take your chances with ‘Other’ entertainment that’s NOT multi-award winning. ( ‘Entertainer of the Year’ And 2x ‘Impressionist of the Year’)
…your audience may wish you hadn’t.

Your corporate event guests will rave about this fast-paced and fun filled celebration of hit music mixed with hilarious clean comedy. You will be highly entertained by an all-star celebrity cast of rapid-fire voice impressions including many of Las Vegas’ biggest headliners and Billboard’s greatest artists.

The Temptations, Cher, Elton John, Neil Diamond, Elvis, The Phantom of the Opera, and The Rat Pack are just a small sample of the 75 plus voices Larry performs in each show. When you throw a few famous comedians, Hollywood celebrities, and presidential voices in the mix, there is enough comedy and music to appeal to just about everyone. Get Ready… for some fun!When you factor in Larry’s ability to customize his corporate event entertainment his show becomes an even greater value! 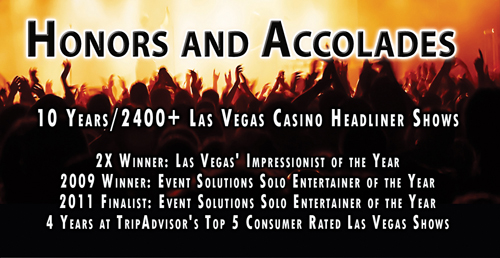